My Father, the pilot's story of survival

My father, Adrian Johnson, was a remarkable man with a reputation as an excellent pilot with a string of adventures during his years.

In 1959, long before I was born, he was piloting a charter flight from Wagga Wagga (YSWG) destined for Alice Springs (YBAS) when his plane went missing. He was 22 years old at the time.

He was carrying passengers, two other men from Wagga, Mr. Alexander Wilson and Mr. Richard Gorman.

They started from Wagga at first light on Sunday the 17th of May, and arrived in Broken Hill at 10:30am for refuelling.

They took off from Broken Hill at 11am, their next destination being Oodnadatta (YOOD) in South Australia, 470 miles apart. 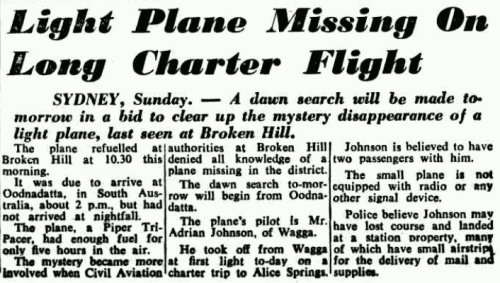 The plane had run out of fuel on approach to Oodnadatta.

The aircraft was a single engine Piper Tri-Pacer which should have had fuel enough for five hours flight time.

The Civil Aviation Authority at Broken Hill denied there was any knowledge of a missing plane.

The overnight temperature was 17.8C. 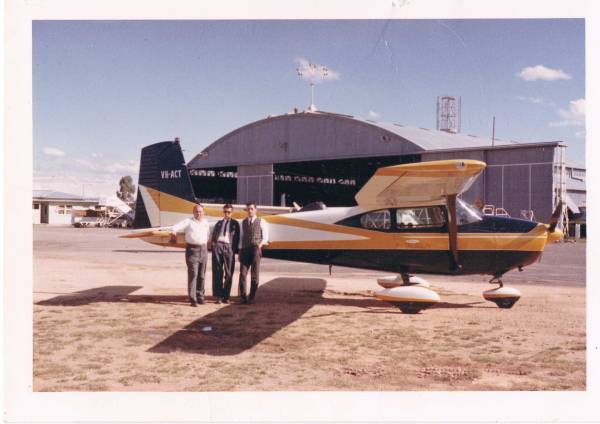 Judging from the ages of the men in this photo, I suspect them to be Mr. Wilson and Mr. Gorman (pilot Adrian Johnson in the middle). Though the plane pictured here is a Cessna 182B Skylane registered in 1961, not the Piper from 1959. Either the same men on a flight two years later, or the photo may be unrelated. Details yet to be confirmed. 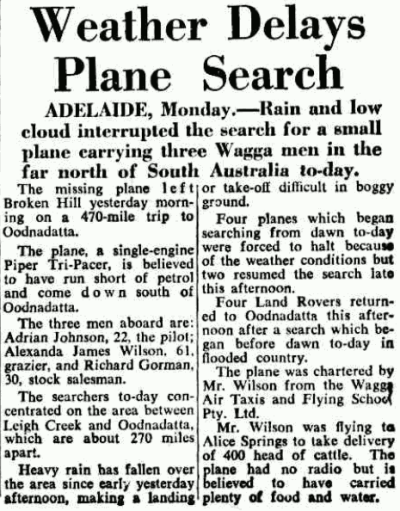 Police believed them likely to have landed at the airstrip of a station property.

A search organised by the Department Of Aviation began at dawn Monday the 18th from Oodnadatta.

Heavy rain fell in the region started in the afternoon the day before, meaning landings or taking off on airstrips in the area was very difficult.

Four planes searched from dawn, but stopped due to the weather and two aircraft resumed later on in the afternoon.

Also four Land Rovers were searching since dawn but returned to Oodnadatta that afternoon.

Fabric strips were laid out next the aircraft to form the words: “Urgently require food and water”

Mr Wilson was planning to arrive in Alice Springs to take delivery of 400 head of cattle.

There was no radio or signalling equipment on board, but the plane contained plenty of food and water.

The overnight temperature was 16.8C. Thankfully in a comfortable range. 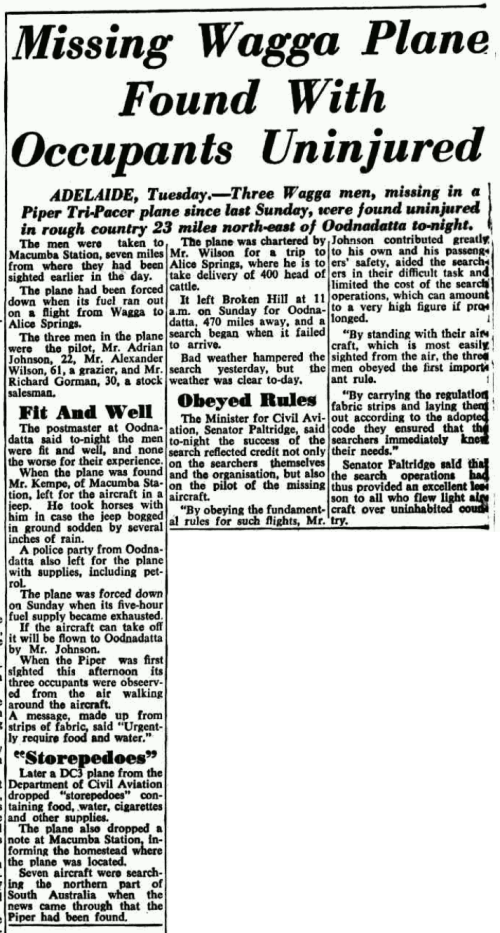 On Tuesday the 19th, the weather was clear but the region was sodden and boggy.

At the time, there were seven aircraft searching in the northern part of South Australia when the plane was sighted from the air that afternoon (approx S27°19.50' E135°59.24'), 23 miles (38 kilometres) north-east from Oodnadatta, and the men could be seen walking around the aircraft.

A DC3 plane was dispatched by the Department Of Civil Aviation and performed a supply drop of food, water, cigarettes and other supplies for the men, before turning to Macumba Station (approx S27°3.86' E135°41.66') where it dropped a note giving the location of the Piper.

Mr. Kempe of Macumba Station, seven miles (11 kilometres) away headed out to the site with a jeep and horses in case he got bogged due to the sodden ground.

A police party took enough fuel out to the location to enable the plane to be flown to Oodnadatta once ready.

My father and the two passengers were then taken back to Macumba Station and announced as fit and well. 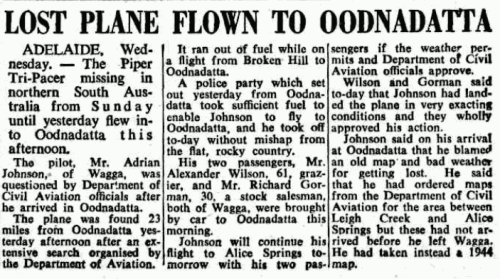 The morning of May 20, Mr. Wilson and Mr. Gorman were taken from Macumba Station to Oodnadatta in a car.

That afternoon, my father returned to the aircraft and flew the plane to Oodnadatta. When he arrived, officials from the Civil Aviation Authority questioned him. There were two factors that made the journey difficult: 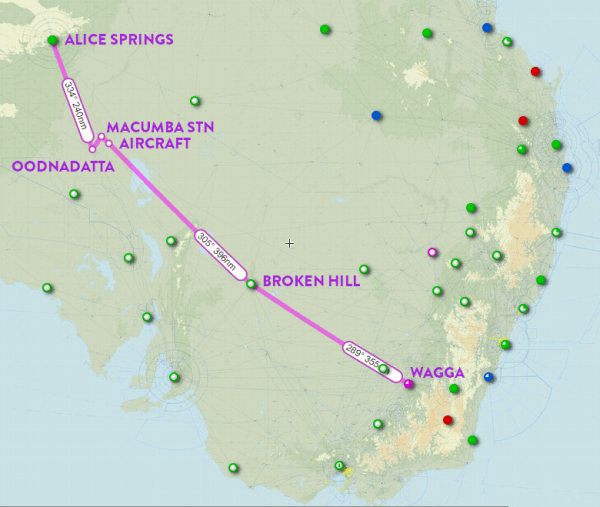 Early the next morning of Thursday May 21, my father and his two passengers took off again to continue the journey to Alice Springs, where Mr. Wilson took stock of his 400 head of sheep.

Mr. Wilson and Mr. Gorman were of the opinion that my father's actions were correct and just under the conditions they were under.

By obeying the fundamental rules for such flights, Mr. Johnson contributed greatly to his own and his passengers' safety, aided the searchers in their difficult task and limited the cost of the search operations, which can amount to a very high figure if pro-longed.

By standing with their air-craft, which is most easily sighted from the air, the three men obeyed the first important rule.

By carrying the regulation fabric strips and laying them out according to the adopted code they ensured that the searchers immediately knew their needs.

The search operations had thus provided an excellent lesson to all who flew light air craft over uninhabited country.

If this story played out in the modern world, I'm sure it would have been a melting pot of litigation, stress and psychological therapy. But they simply got on with the job. I'm of the option that regional men of that era (usual faults aside) were much more resilient and grounded than they are today. How things have changed.