In February, myself and a couple of mates from work attended ReactConf 2020. We got to choose our own accommodation. And we chose the Space Capsule Hotel in Sydney. We booked it, then read the fine print.

Hmmm maybe we should have got the upgraded rooms. Oh well, we got what we got.

Some thought what we were doing was dreadful/unconventional but we were keen to check it out nonetheless.

In addition, we got super cheap Bus tickets from Canberra to Sydney. This ended up being a trip on a super budget. Wasn't the intention, but it worked out that way. On arrival in Sydney we headed up George Street until we found the hotel. Once inside, we elected to skip the elevator and take the stairs up each level passing the various clubs and venues on the lower floors.

Once we signed in and entered the pod level, we got our first view of the banks of pods. 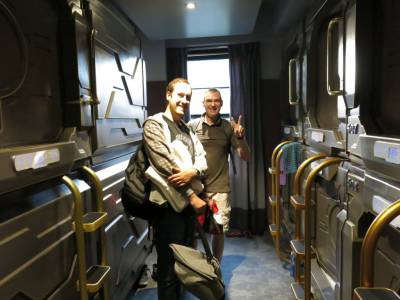 One of the guys got a side-entrance pod. These cost a few dollars more, but there are fewer of them and are away from the main traffic. Ours were the front opening capsules. There are more of these stacked together in banks. 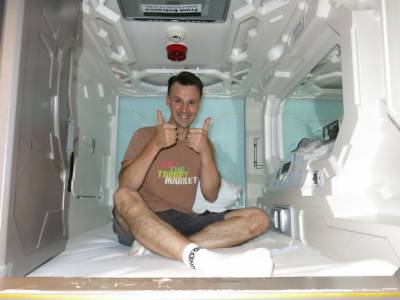 You need to use the small ladder built into the side to reach the upper stack of pods, but lower pods you can just crawl into. The beds were super comfy and everything is really nice and clean.

There are also rooms with more spacious pods, and less per room, but these were more expensive. But we didn't see any of those on this trip.

The pod has a mirror and a control console. This was the only thing I had an issue with. There was some kind of electrical glitch in my panel. The sleep mode which was supposed to quieten the fan and lights didn't really work, so I had to remove the key card in order to shut the pod down to get some sleep.

But the USB and power outlets are were fine and enabled me to do a bit of work and study in the evening.

They even had a small safe in there but I didn't make use of that.

Regarding noise, yes there's some noise, but when you're staying in the middle of the city of a Friday and Saturday, you can expect a bit of yahooing outside and also some traffic from people coming in from a night out at all hours.

But everyone was considerate and tried to keep their noise at a minimum. Everyone we met was really friendly.

Staff were helpful, though I did wonder if they were borderline impatient. 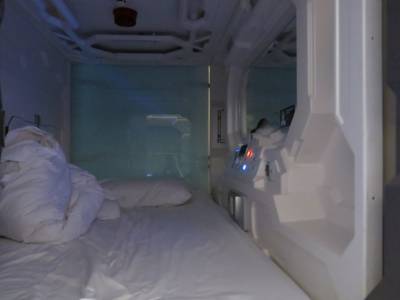 Of course, there was ReactConf which was the point of the trip in the first place. It was a pretty good event, met some really great people. Some good topics covered. Also got to catch up with some of our NZ guys which is always a bit of treat. The event was excellently run. The intros to the talks were a little awkward at times, but it didn't matter too much.

In terms of the space pod capsules, for work travel accommodation, this is the only way to go. I think it beats room accommodation hands down. Let's face it, you get to a hotel room and say “Isn't this nice?”. But you really only make use of the bed and the loo, and that's probably all because you're usually out on the town with work mates.

The capsule just gives you everything you need in a novel setting.

I'm pretty sold on the idea for all future work travel, or solo travel. I'll also bring my son to try it if it's just him and I, and we happen to stay in town for whatever reason.

There's also a second hotel in Sydney City that does space capsules so I'll probably check that out next time around.