The Animals of Canberra 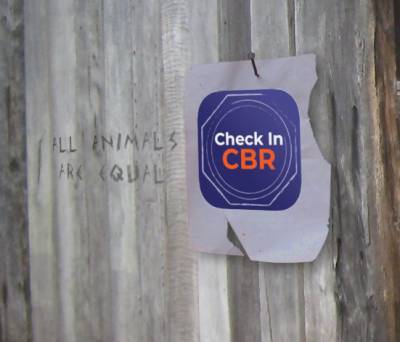 It was one of the hens that noticed it first. She had passed by the house quite early that day and had observed the new sign. It was right next to the first rule that stated: “All animals are equal”.

She could not read it of course, so had gone to fetch Muriel the goat to read it for her.

Muriel looked carefully at the sign and frowned. Others had gathered around her to see what the new sign was.

Muriel read it slowly and clearly for the others: “No animal is permitted to enter any farm building or visit any area of the farm without first using the Check In CBR App on your Smartphone - By Order of Napoleon”.

Many of the animals looked at each other in confusion. But Muriel looked over at Boxer who was both angry and alarmed.

It was much later in the afternoon that the call went out for all the animals to gather at the barn for a Meeting. Snowball made his rounds announcing to all the animals in turn that Napoleon would be addressing them regarding the new sign.

The animals gathered and there was much noise and chatter between them as they waited to hear the announcement. And the animals waited still.

After a sufficient amount of time was allowed to pass to build the importance of the occasion, Snowball opened the house door and strode into the barn.

Napoleon appeared at the door of the barn and marched in his slow and dignified manner to the platform.

He raised himself up at the podium, and wore his most important expression. Between the slits of his eyes he gazed slyly at each animal to ensure that every eye was directed his way.

“My dear Comrades,” he began, “today is a great day, one of celebration. You know the challenges we face in order to keep you safe from harm from those who would come and take this farm from us”.

“The use of the Check In CBR App has been a major success for us all, and it is for this very reason that we must now make it compulsory. All animals will henceforth be expected to check-in. Whether it be to the barn, the Windmill, or the pond, you must check-in. Failure to do so will result in a very swift and severe punishment for any animal.”

Muriel raised her voice and asked: “For how long, Comrade Napoleon?”.

The other animals recoiled at her foolhardy boldness.

Snowball turned upon Muriel with a savage look, but Napoleon calmly held up his trotter, closed his eyes, and slowly shook his head.

“Do you remember the way things once were when Jones ran the farm? When we were unsafe and needed protection? Remember those days? We can now watch you, take care of you and protect you always to ensure you come to no harm.”

“Who would ever wish those days back? Who?”.

The animals looked to each other and began to nod in agreement. Yes, it was a good idea. A very good idea to be kept safe. Because of course, no one could remember anymore what the farm had once been like.